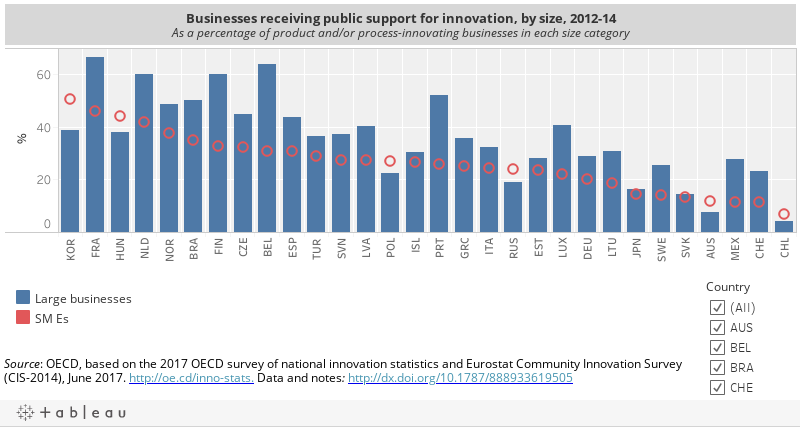 I am very excited to kick off our blog and share with you why and how we think it is important to improve entrepreneurship education.

To start things off, I want to share two graphs of Innovation statistics and indicators published by the OECD.

The first chart shows the percentage of innovation-driven businesses that receive money from their country’s governments. Here, South Korea clearly has the highest support for SMEs and about average support for large companies when compared to other countries.

The second chart shows the percentage of businesses that actually take a new product or service to the market. South Korea is now fifth from the right, meaning it has one of the lowest rates for companies introducing products or services that are first-of-its-kind in the world.

Why could this be?

One reason, among probably many, is that organizations in South Korea over-rely on "benchmarking" to make decisions on grants and investments. When entrepreneurs present an idea, it is always in front of a committee that emphasizes the entrepreneur’s ability to compare against something that already exists and has been made successful by a well-known company.

"You are just like Apple but cheaper? Great! Here is some money to help you keep going."

On the other hand, if the idea cannot be placed in a two-by-two business chart alongside logos of major brands, then it simply won't be considered further.

"Tell me how you compare against Apple. No? Then you have not really thought this out. Come back later."

So what can be done about it?

This is something that our team has been thinking about and experimenting on for a while. For the past year, we have been running programs together with universities and government organizations in Korea to help entrepreneurs build teams, develop products, and take test them in the market. We have had some early success throughout several pilot programs, and we are very excited to start the new year launching new content and programs.

"To run an efficient team, you only need three people: a hipster, a hacker, and a hustler" – Rei Inamoto, founding partner of Inamoto & Co.

Do you need VC funding?

With interest rates still at an all-time low, money is looking for new places to get returns. As a result, people are looking into markets they previously considered...